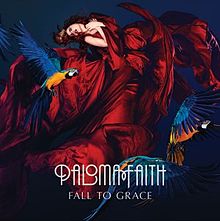 Fall to Grace is the second studio album by English recording artist Paloma Faith. It was released by RCA Records on 28 May 2012. She worked on the album with producer Nellee Hooper, who previously worked with artists such as Madonna, Björk, Massive Attack, and Gwen Stefani. Fall to Grace features production styles crossing the genres of pop, soul and R&B. The album was received positively by most critics. A deluxe edition was released the same day, which contains acoustic versions of five songs from the album.

The album’s lead single was “Picking Up the Pieces”, which was released on 20 May 2012 and peaked at number 7, making it Paloma’s highest charting single until “Only Love Can Hurt Like This” peaked at number 6. Fall to Grace peaked at number 2 in the UK and was certified Double Platinum by the British Phonographic Industry after selling more than 600,000 copies. Four more singles were released from the album, “30 Minute Love Affair”, “Never Tear Us Apart”, “Just Be” and “Black & Blue”. Paloma embarked on her second tour in early 2013 to promote the album.