Do You Want the Truth or Something Beautiful? 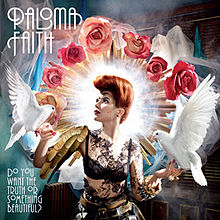 The album received positive reviews from critics. Since its release, the album spent 106 weeks on the UK Albums Chart and peaked at number 9. It was announced on 1 March 2013 that the album had been certified 2× Platinum with sales exceeding 600,000 copies. To promote the album Faith embarked her first concert Do You Want the Truth or Something Beautiful Tour in 12 February 2010 which visited Europe.