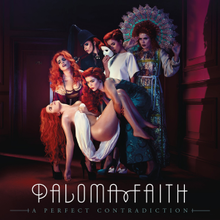 A Perfect Contradiction is the third studio album by English recording artist Paloma Faith, released by Sony Music Entertainment on 10 March 2014. Musically, the album is a pop album, with elements of R&B, jazz, soul, Motown and disco. The album received mixed to positive reviews; it has so far spawned sixsingles; “Can’t Rely on You”, “Only Love Can Hurt Like This”, “Trouble with My Baby”, “Ready for the Good Life”, “Leave While I’m Not Looking” and “Beauty Remains”.

On 15 September 2014, it was announced that a repackaged version of the album, entitled A Perfect Contradiction: Outsiders’ Edition, will be released on 10 November 2014, postponed from the original date of 3 November 2014. It will feature three new songs including “Changing”, her collaboration with Sigma.